All my grandparents were conservative people.  They grew up in a time when all your neighbors were your family and you tended to know everyone’s business whether you wanted to or not.   Grandpa Elzie’s dad often warned his sons about not visiting the taverns in Bernadotte and when they may have strayed, they found their father waking them earlier and earlier in the morning to go break mustangs brought in from out west.  Better to heed your father’s advice than have to break mustangs!  When visiting town, ‘stay away from the more “colorful” establishments and stick to good company,’ they were advised.

My Chenoweth grandparents lived in Fulton County, near Bernadotte, IL during the early part of their marriage.  Grandpa Elzie Chenoweth was 23 years old when they married in 1921; Grandma Vera France was only 19.  Like most farm families of the time, they worked very hard during the day. Most of the necessities of life were from the farm: milk, eggs, cream, butter.  Flour probably came from the mill at Bernadotte, but sugar for baking and material and thread for clothing came from town, often through barter.  They didn’t go to town daily for items they needed.  Friday or Saturday nights were often set aside for town trading eggs for other necessities and enjoying some entertainment with other family members and friends their age.

Grandma Vera often spoke of “The Lincolns”, friends of theirs from their Fulton County days – Floyd and Mildred Lincoln. Grandma Vera always claimed the Lincolns were directly related to “That Lincoln” meaning the 16th president, Abraham Lincoln.  A direct connection is a little difficult to establish though. 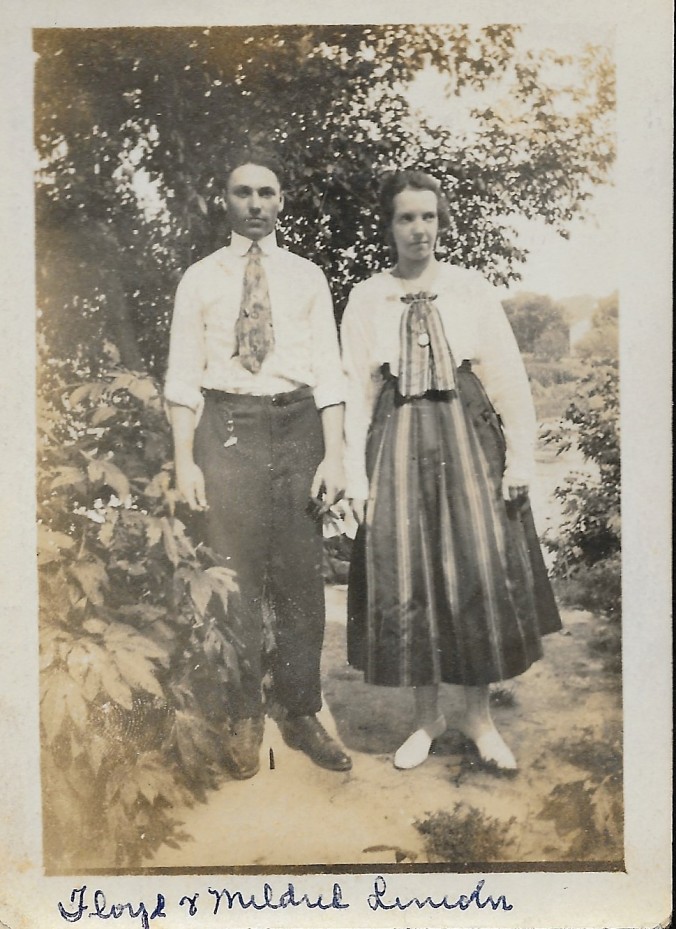 Mildred’s maiden name was Reneau, pronounced “Ree-No”.  She was the daughter of Austin Sherman Reneau and Lucy Miriam Parks.  Mildred was born 3 October 1902 and was nine months younger than my Grandma Vera.

It seemed to me Grandpa and Grandma matched up well with the Lincolns.  They were very similar in background and age and they apparently struck up a fast friendship.

Grandma shared how one  Friday evening she and Mildred  were walking around the town of Table Grove shopping, admiring other women’s clothing, hairstyles, and such when they came upon a woman who had a very unique and new hairstyle.  Recall in the 1920s how Flappers were all the rage and this woman wore her hair in a “flapper-style” bob haircut.

Grandma and Mildred commented on how daring and trendy this new haircut was and how they liked it.  After discussing the hairstyle for some time, both women dared each other to get their haircut in a like fashion before they returned to town the following week.

Grandma Vera took Mildred at her word and during the week cut her long, flowing, brown hair.  According to Grandma, her mother, Belle, was upset and cried over the loss of her daughter’s beautiful brown hair, but Grandma Vera liked the style and couldn’t wait to see Mildred on Friday evening.

Friday came and Grandpa and Grandma gathered the eggs and other items they would barter in town and drove in to visit with the Lincolns.  When they got to town, Grandma discovered Mildred Lincoln had ‘chickened-out’ during the week and didn’t cut her hair.  Grandma couldn’t believe Mildred had done this to her!  To top it all off, someone told Grandma and Mildred the lady who wore the bob haircut was of “ill-repute” and most likely ran the town brothel!

Grandma never forgot this and she often commented on how her mother was so distraught over the loss of her long hair.  I often wondered if her mother wasn’t distraught over the fact her daughter chose to have her haircut like the lady who ran the Cathouse in town!  I was, however, very proud of the fact my grandmother followed through on her agreement and she was willing to make fun of herself by sharing this hilarious story.

One thought on “On a Dare”